Welcome to a follow-up to my article about using a newer (2012) Mac after taking a trip down Memory Lane with an older (2006) iMac. I have now been using this 2012 Mac Mini for just about a month, and have some additional thoughts on Apple, Macs and macOS.

Using macOS 10.13.4 (High Sierra) for a while, it has become a disgust / delight flip-flop. macOS generally has a nice-looking user interface and most apps are consistent with the system look-and-feel. Nearly all of Apple's apps for use on macOS are very reliable and stable, but then there's apps like Photos.

Photos stinkfest
After using a Mac for a while in 2009 to 2012, I missed having an app on Linux or BSD with Photos-like functionality. There were a couple of open-source apps that came close, but still didn't cut it. Zoom to the present and while usually nice-looking, Photos is kind of a mess.

I have about 60,000 pictures, and have tried several times to import them into Photos. I know it will take a while, so I start the import process then go to bed. Every time except for the last, I'd awaken the screen in the morning to a crash report. Ugh. With each new attempt, and each new crash report, my confidence in Photos eroded quickly. I finally resorted to importing small batches of folders until I could narrow down what was causing the crashes. As it turns out, a few .3gp files were tripping up Photos. I don't know why they were causing a problem, but good grief, that's a horrible failure mode. It shouldn't crash the app, it should just register the file as unimportable and move on.

Sometimes it seems that some outside 3rd-party beginner developed Photos. When I'd add new albums using the list-view on the left side of the app, it would add an untitled folder, then jump down to the last existing folder and go into rename mode. So if you're not careful, you end up renaming the existing folder instead of the newly created one. On top of that, the labels of some of the existing album folders are in a color that's almost impossible to read. The album label background is a dark color and so is the font. Seriously y'all, this is very buggy and doesn't seem like a very polished product. 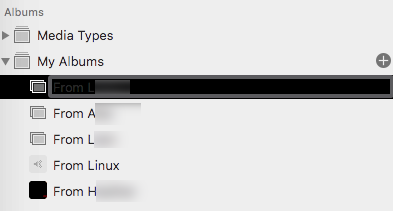 An example of the unreadable label color in Photos 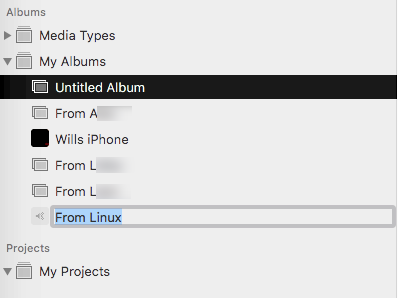 Aversion to 'Save As'
Apps like Preview and TextEdit are very useful, but it seems like Apple developers hate including 'Save As...' in the File menu. Why?

In order to 'Save As' in one of those apps, you need to click the window's title and there it can be edited. Why not just stick with what most people are used to? I don't find this change very helpful.

One file format to save them all
This is not Mac-specific, but it's a royal pain to copy files from Linux or BSD in bulk to an external drive, then try to copy those files over to the Mac. Linux supports reading HFS+ but won't write it. Mac will read exFAT and NTFS, but you need to use Fuse on Linux for those formats, and they both wrote corrupted data. Mac won't read ext4 without Fuse, and the Fuse implementation, at least on my Mini, is slower than molasses in December. It would be supremely helpful if Microsoft, Linux and BSD developers and Apple would all just agree on one file format that could be reliably used among them without requiring slow Fuse, or copying everything over the network.

The screen flicker
Apparently the Intel HD 4000 graphics chip in the Mini has an issue with flickering. There were a couple of firmware updates years ago to fix this, but it seems to still exist with High Sierra. It's not super bad on my Mini, but it's definitely there. It's most evident when scrolling up or down in Safari or large views in other apps. I have the max 16 GB of RAM, so it's not like it's starving for VRAM. I really hope Apple fixes this because it makes Apple hardware like mine feel cheap and poorly designed.

Developing on the Mac
Now that I've had some time to take in Xcode and Objective-C, I really do appreciate most of the macOS programming APIs. The Xcode app itself is a mixed bag, with some rough edges and crashes for no good reason. But I appreciate what the NeXT developers, and the Apple devopers after that, have done. The APIs are not some hot mess of old and new smashed together like Win32 programming. Nearly all of the components I've worked with use good defaults and don't have weird idiosyncrasies. For someone who has done UI development completely in code with Gtk and FLTK, using drawn lines to connect code to events and connect objects to code was very foreign. Once you stop kicking and screaming against it, building macOS apps is almost a breeze compared to other IDEs and languages.

I know that Swift is the new(ish) hotness, but it seems like the language is still in a bit of flux, so I'll wait a while until it's more mature. Objective-C has been around for a long time and is pretty mature at this point, so I don't have to worry about big language changes and rewriting code because of it.

Other nits
Time Machine is a super-useful backup system and has saved my bacon a few times. I find it kind of silly that you can't manually start a backup from the Time Machine preference panel, but instead have to initiate it from the menu bar item, if it's visible.

I wish there was an option to pause or completely stop 'photoanalysisd'. Sometimes this process keeps my Mini toasty warm and busy when I don't want it to be. In fact, having an option in Photos to disable photo analysis altogether would be very much appreciated.

Buyer's remorse?
A long time ago, I used to tell everyone how superior Apple's stuff was compared to commodity PC systems. I don't feel that way much anymore. I think macOS is, overall, a very good OS. From the time I had my ancient iMac to now, I can't think of more than one time I saw a kernel panic (similar to Window's 'BSOD'). While not as responsive and snappy as it once was, macOS has made some good incremental strides. The problem is the hardware.

From what I remember, Apple has always said that because they make both the hardware and software that the Mac computing experience is superior to someone running Windows. I don't know about that, though. As an IT guy, I have seen Windows work on a remarkable array of differing hardware, and it usually can run well despite the big differences in hardware. Based on news reports and reading Apple-centric forums, it seems like there's an awful lot of Apple hardware issues. So you're paying the 'Apple Tax' when you buy a Mac or iDevice and sometimes the hardware is buggier than commodity stuff. Sounds like a raw deal to me.

I don't regret purchasing this Mac Mini. For one it was used and the company selling it offered a pretty good price for it, considering it's an Apple product. Secondly, it allows me to use macOS without having to cobble together a Hackintosh. If you're fine getting software pieces and kexts from all over the place, and having Apple updates break stuff, I suppose a Hackintosh is fine and is probably superior to Apple hardware in most cases. I wanted something that was officially supported by Apple but wasn't $3,000. I settled for this Mini and it's providing me the expected level of mediocre performance. It's also relatively stable and I can do my day-to-day support business stuff on it. The user interface is pleasant and doesn't require me to tweak config and theme files to get the desired result.

Would I recommend someone else purchasing the same Mini and expecting decent performance? Probably not. It's an 'okay' computer with the Western Digital SSD I installed into it, but using it with the standard 5,400 RPM mechanical drive will make you say discouraging words and will cause you to dream of better systems. The dual-core 2.5 GHz processor is not very exciting and really makes you wonder why Apple didn't pay the small extra money to install a quad-core instead. I tolerate the sometimes slow performance because I need a Mac development machine without paying thousands of dollars. If the day comes when I'm blessed with the extra funds to purchase a better Mac, then I'll do it -- not a new one, though, a used one, because I really don't want to directly give Apple any of my money right now. If and when things change, I may also change my mind, but not right now.

As always, I'm a macOS fan, but not much of an Apple fan.